Once the well awaited child has arrived, we celebrate his/her birth and give thanks.  This involves feeding the believers for the occasion of the child’s birth, and thus, it is highly recommended to invite family and friends on the 7th day after the birth of the child (or near that day) to share in the auspicious occasion of its birth.

The naming of the child is of great importance.  When choosing a name, one must keep in mind the meaning of the name as this has an effect on the child.  Additionally, it is highly recommended to give the child a name of one of our religions masters as these are especially blessed names that carry a lot of barakah.

Circumcision is recommended to be performed on the seventh day after birth. This makes the body of the child chaste and promotes health. Dear Child also outlines a special prayer to be recited during this act.

Aqiqah is highly recommended (mustahab) and it is good to perform on the seventh day after the birth of the child, however it can be performed later also. The ceremony of aqiqah consists of two parts.  The first part is the animal sacrifice, for which, the sacrifice should be a sheep, camel or goat.  For the aqiqah of a boy the animal should be male, and for the aqiqah of a girl it should be female. The animal should be slaughtered in the name of the child for his/her protection. The blessing behind performing aqiqah is to feed the poor.

The second part of aqiqah is the shaving of the head.  The baby’s hair on the head from the womb should be completely shaved off and the weight of this hair should be given as sadqua in gold or silver coins to the poor and needy people. If coins are not available, then the equivalent should be given in the same amount as money. This hair should then be buried in the ground. It is mustahab (highly recommended) to do this on the seventh day after birth.  Dear Child also outlines special prayers to be recited during this act. 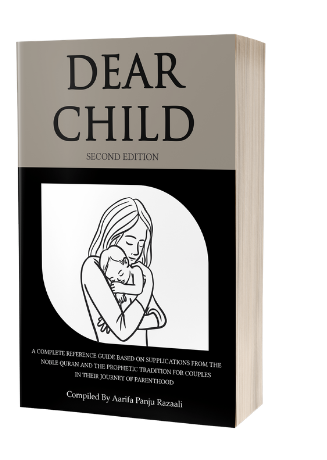